Michael: Doctor, what is more serious, a head injury or a foot injury?

Michael: Well, you don’t have all the information. 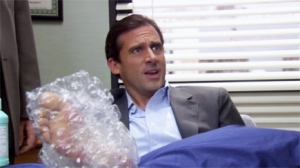 On one of my favorite episodes of the office, Michael Scott burns his foot on a George Foreman grill. Shortly after, one of his coworkers has a concussion. Instead of having sympathy for his more seriously injured colleague, he continues to try to redirect the attention to himself and his burned foot.

I am happy that Elder Anderson said the following:

But everyone, independent of his or her decisions and beliefs, deserves our kindness and consideration.The Savior taught us to love not only our friends but also those who disagree with us—and even those who repudiate us. He said: “For if ye love them which love you, what reward have ye? … And if ye salute your brethren only, what do ye more than others?”The Prophet Joseph Smith warned us to “beware of self-righteousness” and to enlarge our hearts toward all men and women until we feel “to take them upon our shoulders.” In the gospel of Jesus Christ, there is no place for ridicule, bullying, or bigotry.

I hope that this message was heard by my fellow church members, but I fear that it wasn’t. The only quote from above reference that I saw turned into fancy-general-conference-meme-form was from MormonFeminist.org. In fact, I just googled “‘In the gospel of Jesus Christ, there is no place for ridicule, bullying, or bigotry” meme’ to find the meme, and Google returned five results back. Five. Does that say anything about how we don’t care about sharing this message, or am I just horrible at Google? 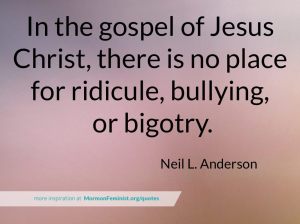 I still don’t see a general Mormon understanding of how difficult it is to be a part of the LGBTQ community. We put our focus on ourselves, how hard it is to get a Facebook comment that says ‘You are judgmental’. We don’t care to examine how we ostracize LGBTQ Mormons from family, church, and community and the suffering that entails.

I’ve found myself in the midst of Mormon conversation that goes along the lines of ‘Gay people should still be imprisoned for the destruction of our society’ or ‘a gay child is one of the worst things that could ever happen to a parent’ and either everyone around agrees or no one is brave enough to disagree. Bigotry is alive and well in the culture of our church.

Here’s another striking example of bigotry in the Church that came from a recent mother’s account in the HuffPost:

Before my son came out in 2012, we had been in our ward or the congregation for about 10 years. We had many, many dear friends in that ward. So when we had started to tell people in that ward that our son was gay, the friends that we had (not overnight but gradually) just sort of evaporated and the friends we thought we had… we didn’t have as much. It became what felt like an old-fashioned Amish shunning. When Jordan was 13 (two years ago, when he came out) and he passed the sacrament, which is similar to Catholic communion, there were people in the congregation who wouldn’t take it from my son, they would only take it from other boys. It was incredibly hurtful for me to see that happen. My son is 15 now and has never broken any of our church’s standards: he’s never even held a boy’s hand, he’s never had a boyfriend, he’s never broken any commandments that our church has set. It shouldn’t even be an issue if he had. But according to the rules that our Church has, he is still totally worthy to pass the sacrament, but people there still didn’t think he was good enough. So that was rough. And we would have people say pretty ignorant things to us. I had a woman tell me once that I should have my children taken away from me and given to some mother that would teach them to follow the prophet better. You know, my husband and I had assignments in that ward. I was teaching a class to the 15- and 16-year-old teenagers and my husband was president of the Elders Quorum, a group of older men of the congregation. We were getting so many complaints from other people in the ward that they didn’t want us working with their children or people in their family that we finally just stepped down from those callings. People wouldn’t sit by us in class, they wouldn’t talk to my son, they didn’t want him to go on scout camp outs. They wouldn’t let their sons go if my son was going and things like that.

We ended up switching wards. We are attending a different ward now. We have been there for about a year. And it’s been a little bit better, probably because we don’t know people as well so it’s not as hurtful when they’re not as friendly. We have a few people that have been supportive and sweet, but it’s still really hard. A few people will talk to us privately and thank us for what we’re doing, but there has not been anybody that’s been vocally supportive and will stand up for us. We feel very alone.

I wish that bigotry, especially against the LGBTQ community, could be addressed and rebuked directly from church leadership and not just a footnote in a talk where the focus is on the persecution of the church for it’s stance on marriage.