When in doubt, the movie Mean Girls always seems to hold the answers of life’s most primal human interactions. How else would I know I shouldn’t wear vests? And I now always suspect a three-way phone call attack, even when the person on the other line is just my State Farm Rep. trying to sell me life insurance.

So I see no reason why this iconic film should let me down now, even though the results of the election sure as hell have.

Though as I think about the movie’s plot, I guess I have to admit it has always bothered me that Janice Ian was so outraged at Lindsey Lo- I mean, Cady Heron when she finds out that Cady never invited her to the unintentionally huge party she threw. Ok, what Janice is really mad about is that Cady ditched her art show in order to hang out with some personality devoid Plastic girls and other populars and had become an entirely different person. It’s hard when your friends change. It’s also hard when you realize you had a hand in driving them to it.

You see, Janice tells Cady (while standing out of the sun roof of a moving car, no less) that she is a bitch, a mean girl. And she’s right; Cady had become those things. But she didn’t do it alone. I’m not here to get into a Mean Girls battle of nature vs. nurture, but clearly the Plastics and Janice had a remarkably strong influence in turning Cady from a normal, cool girl into a phonier caricature of her former self. After all, it was Janice who thought it would be funny for Cady to pretend to befriend Regina George, the most popular girl in school, who supposedly ruined Janice’s life when they were but pre-teens. It was Janice who concocted the scheme for Cady to strategically try to exact her own revenge on Regina. And it was Regina who modeled how to back stab and mistreat those you call friends and family when you’re in a position of beauty and power. Other people “let you do it” when you’re popular, after all.

And that’s where our dear, dear friend Donald Trump comes in; the original Queen Bee Mean Girl, if you will. We have all watched in awe, horror, confusion, and nausea as this insult to humanity has gone from a scorned White House Correspondent’s Dinner guest, to GOP presidential hopeful, to GOP nominee, and now to… I can’t even say it. I won’t say it. I’m gonna make like it’s Mean Girls 2 and pretend it never happened. This may be a good time to break out into hashtags…

I would say if felt good to get that all out of my system, but it doesn’t. Not even close.  And I know what happens at the end of Mean Girls– Cady takes her victory crown from winning Spring Fling Queen, breaks it all apart and gives a piece to as many people as possible because everyone is a special Sunflower, even though there should NOT have been enough of that small plastic crown to give away to as many people as she did. We’re supposed to realize, as Cady did, that name calling won’t make you a smarter, more attractive, better person. We’re supposed to rally together after that magical school dance and embrace all our differences and celebrate each other.

There’s a problem though.

Trump has shown us that you can be the Plastic, the Meathead, the Jerk, the Hater, the Fear Monger, and still win the day. We know we should be good people in spite of what others may say or do, but it becomes trickier to remember when the school bully is the one who ends up winning in the end.

You can’t run a campaign based on hate rhetoric, sexism, racism, and fear, and then try to get everyone to unite under your banner You can’t be the cause of division and then try to tell people that it’s time to come together. You can’t ostracize half of the country and be surprised when they don’t want to come sit at your lunch table.  And I sure as hell won’t start supporting him now just because half our country admitted its ignorance and lack of compassion on November 8, 2016.

Trump is a monster, a Frankenbot splicing of Regina and Janice. And in me, he’s created a Cady, and this Cady isn’t going to passively hand back her hard-earned crown- this Cady fights monsters. And defeating a monster who cheats and swindles, grabs pussies and builds walls instead of tearing them down, all whilst bearing one of the highest titles in the land, is a daunting task. And I know there are many out there saying that it’s pathetic that Democrats aren’t conceding gracefully; that somehow being afraid for your safety and mental well-being in the wake of this last Tuesday’s results makes you a sore loser and crybaby.  But to echo a popular sentiment floating around Facebook and Twitter, it must be really great to be able to walk out your front door without fear, knowing the president-elect’s sexism and racism won’t affect you. I’m sure that makes Trump’s win a lot easier to swallow.

But for those of us who ARE affected by this man’s insane xenophobia, misogyny, and homophobia, etc., we have a right to grieve, freak out, and fight, if our hearts can still handle it. We’re not crying because we just can’t handle not getting a gold medal; we’re crying because we feel deeply for the loss of the dream of the first female president. We’re mourning because we now feel uncertain of our futures and how we fit into America’s. So don’t tell me to get over it, to stop whining, or to be the bigger person. I’ve tried that before; sucking it up doesn’t do any good; it just plain sucks. In fact, don’t tell me what to do, period. As a woman, I’ve always been told what I should do: to be good, but not too good, alluring but not slutty, and smart but not intimidatingly so. Thanks society. And a Trump presidency is already reinforcing all those glorious messages. Just ask Alicia Machado.

Um, anyone who’s not a cis gendered white male, I presume?

In various cities throughout the country, there have been protests and even riots. People are signing petitions asking the electorate to reconsider casting their vote for Trump on December 19. Good. People are mad, and rightfully so, and are doing something with that anger. We don’t need to insult anyone (it’s hard sometimes!) or be abusive though. There is enough of that and we can be better than that. But in my case, Plastic Cady is here to stay, tougher, harder, and less willing to tolerate the BS than ever before. So there you have it. I’m a mean girl, and hopefully, an especially nasty woman, and I’m ready to make this Twitter post a reality: 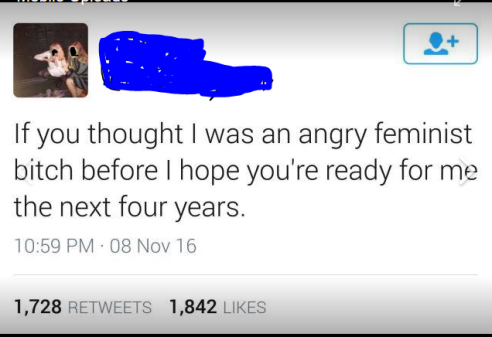 Oh, and mad respect for the creator of this Donald Trump/Mean Girls Mash-Up. Now that’s what I call art!