Today I had the opportunity to attend the dress rehearsal of Eric Samuelsen’s “3,” a play in -you guessed it- three parts that depicts Mormon women navigating their own culture. Plan-B Theatre Company is putting it on this season at the Rose Wagner Theater in Salt Lake City, and you should come to the special preview performance this Wednesday March 26th at 7:00pm because the proceeds will go to the YMF scholarship fund! More details here. The show runs officially from March 27th-April 6th, and it is 85 minutes long.

Even if I didn’t want you to go so you can donate to the scholarship, I would absolutely still tell you to go see this show. It is filled with snappy dialogue, Mormon jokes, raw and unexpected emotions, and cringe-worthy honesty that provoke deep introspection on why we do the things we do. The simplicity of having three actresses perform different roles in each of the three plays allows them a fascinating opportunity to demonstrate the breadth of their talent through taking on a new identity with each act. I don’t believe I’ve revealed any spoilers in this post, so read on!

The first act immediately made me feel at home in such a standard narrative but with a pointed focus; Brandie, who is 22 with three kids and an abusive boyfriend, has just moved into the neighborhood and

all images courtesy of plan-b

the ward, and Bar(bara) and Kell(y) immediately jump into action to help her move in. But as soon as they quickly find that she is less active, their charitable fervor picks up in its intensity; they decide to make Brandie their project and spend many months helping her finish her GED and stop cheating on her boyfriend, who they push her to marry.

A pivotal moment between Brandie and Kell gives voice to the hidden undercurrent in the narrative that neither feels completely comfortable bringing out of the shadows; are Bar and Kell really friends with Brandie because they like her and want to be friends with her, or is it merely a charade to carry out the well-meaning but duty-bound end goal of getting Brandie back in the church and married to her abusive boyfriend? The food storage bins in the backdrop of this performance and the familiar dialogue of helping people move in and getting reactivated created an environment where I could both see the importance of service and compelling sense of community that Mormonism embodies as well as the complexities of exercising those principles in practice.

But even as the first act ended with me feeling mostly warm and fuzzy about my Relief Society sisters, the second act quickly gripped me with serious concern as these same actresses transformed into

jurors on a case to determine the community standard for obscenity. After having to watch pornographic films before they can decide what is and what is not the community standard, one of the women delivers an explanation for her vote to the audience to which the other characters on stage never become apprised in full, creating a confidence in the

audience that allows a depth of insight into the complex web of pornography, sexual violence, perfectionist beauty standards, and toxic relationships. You can almost hear the other audience members’ hearts drop as she speaks with raw honesty about what exactly she finally understands, something she had not previous permitted herself to do. This poignant moment represents the incredible layers of complexity that each act adds with every passing moment.

The last act, however, built up the suspense before unveiling the complexity. When two diligent ward choir participants discover a new couple in the ward with angelic singing abilities, they salivate at the thought of their quaint choir surpassing its humble but wrong-notes-ridden performances to become a group capable of winning the stake choir fest (which isn’t REALLY a competition, but you know). But while the new couple works wonders on the rest of the choir, helping them learn the 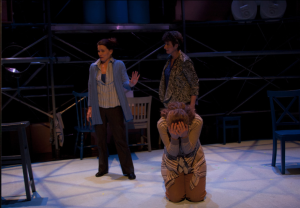 notes and speed the songs from dirges to their proper tempos, their frequent absence from church and the choir raise eyebrows, especially on the two women who most heralded their arrival. The childless couple’s unknown troubles haunt the women’s attempts to keep them in the choir, and eventually lead to a conversation that once again, neither woman wants to broach but both knows needs to be had.

Striking at the core of Mormon women’s dichotomies of faith, righteousness, and motherhood as it demonstrates the paradoxes of trying to live authentic Mormon lives, 3 gives quick snapshots that compel the audience to consider the meaningful ties we hold with those around us, even those we don’t think we know very well- and perhaps especially those who we don’t know well. Samuelsen’s brilliance is evident in how each act ends with you realizing that you feel like the characters are old friends both with each other and yourself, and you wonder how you could possibly reach the same level of familiarity with the next set of characters only to find yourself wrapped up in their stories yet again.

It is the fact that these women’s stories are told with such sensitivity for honesty, unanswered questions, questionable motives, and simple compassion that the whole performance leaves you aching for more. Hats off to director Cheryl Ann Cluff, Eric Samuelsen, the talented actresses (Stephanie Howell, Teresa Sanderson, and Christy Summerhays), and all of Plan-B. May many more Mormon women’s stories be as stunningly portrayed in theater and every art form as 3 is.

2 Responses to “embracing our paradoxes: a review of eric samuelsen’s “3””