Today I was taking my baby sister for a little outing. She bought me some dried seaweed at the Asian market, and as I drove and nibbled she picked up my phone and said, “Ingrid! Eat your seaweed like the cookie monster!” and sent the short video she took of me out to a number of my friends of her choosing for their comedic appreciation via Snapchat. Normally when I’m eating in front of someone else I’m focused on looking as far from the cookie monster as I can because, although I try to reject unwanted constraints of femininity, I feel a strong internal pressure to be ladylike and attractive. I also routinely untag unflattering photos of myself on Facebook and know exactly how to pose for photos in order to reduce my double chin, squinty eyes, armpit fat, whatever zits are plaguing me at the moment, and any of the millions of other flaws I perceive standing in the way of appearing picture-perfect. 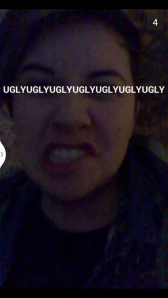 On Snapchat, however, I often take photos of my face that are specifically ugly and intentionally send them out to be viewed, because I want to be funny. I deliberately eat like our national symbol of unladylike eating because (at least according to my baby sister) it was hilarious. I’m definitely not alone. Youths of today, especially teenage girls, are so excited to take ugly, comical selfies and send them to their friends via Snapchat that even the olds are catching on. I recently heard an NPR reporter (who I imagine was drinking out of a mug as old people are wont to) clumsily try to explain that the primary uses of Snapchat are sexting and competing to see which teenaged ruffian can make the most strange/horrifying/amusing facial expression. You know a trend has been hegemonically legitimized when someone talks about it in the same sentence as they define the word “sexting” and drink out of a mug.

Beyond being a silly social media past time for bored teens, I think the trend of unflattering and funny face Snapchat selfies reveals a desires that are being unmet in young women, which are for their bodies to be funny and to be able to be liberated from the pressure of appearing attractive. Take the example of these two photos:

The photo with the men is a funny parody of the sexy photo of the women. The punchline is that it would be hilarious for male bodies to be objects of sexual attention in the same way that women’s bodies are. Male bodies are inherently comical, whereas female bodies are inherently sexy. Women in general are denied the opportunity to be funny, as well as permission to be ugly. Girls and women in the patriarchy earn the right to appear by appealing to the male gaze.

The pressure of being pretty all the time is draining, I’ve learned from personal experience. I feel like I’m never free of the exhausting mental routine of “Is there something in my teeth? Are my legs crossed in a way that makes them look fat? Is my hair getting frizzy? Is my stomach sucked in? Do I have any cellulite showing? What about the weird freckle on my leg? Do I need to refresh my lipstick?” In addition to that energy, I often feel like I’m hiding part of myself– I can go to my room and spread out as much as I like, but having such a heavily policed public face can feel isolating. 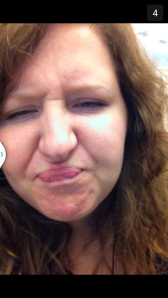 And, of course, I want my appearance to be funny sometimes. Not all the time (I love feeling pretty sometimes, as do many people of all genders) but there are funny things about my body and my appearance that I wish I could use for public enjoyment. Unfortunately it seems like anything a woman does with her body and appearance often comes down to an issue of either being too sexy to be funny, such as any gag that involves showing a lot of skin or not sexy enough (and “not sexy” when a woman is doing it in public is seen as repulsive), like much slapstick humor. Some female comedians are doing awesome and hilarious things to break down this barrier, but us plebian ladies are still struggling– I missed out on what I’m sure would have been a glorious time learning how to burp the alphabet, for example. 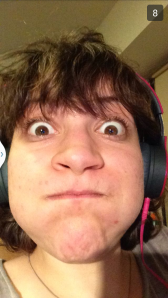 Fortunately we now have Snapchat, which has shown me that I am not at all alone in my desire to do stupid, ugly, hilarious things with my body. Snapchat is something of a safe space because it is usually person-to-person rather than person-to-public and because of its ephemeral quality. I congratulate my fellow girls and women in finding an audience for our hilarious, ugly facemaking abilities, and it is my hope that seeing how excited young ladies are to be unladylike and silly will help us find ways to make it easier for all kinds of folks to goof off and be as ugly as we want to even in situations that are more permanent and public.

ps: big thanks to my adorable/hilarious/silly Snapchat buddies for sending me your ugly faces

4 Responses to “girls just wanna be ugly: what snapchat can tell us about the unmet needs of young women”