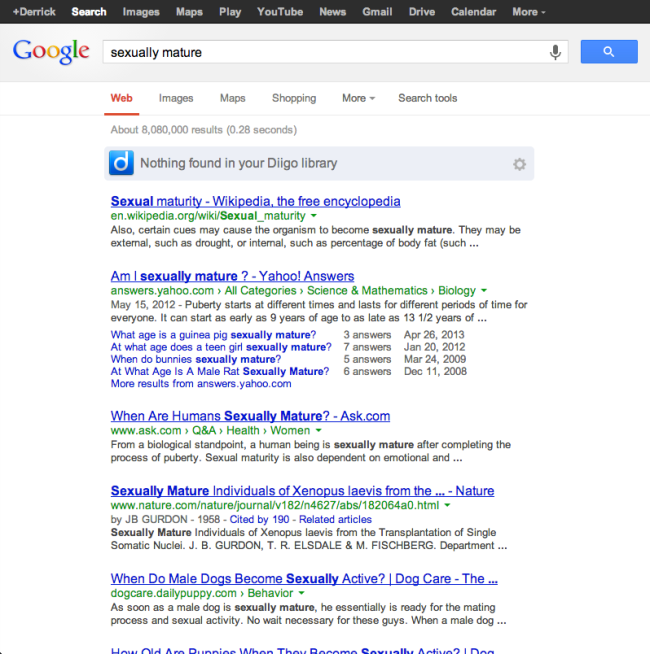 Here’s a question you might want to bring up at the next ward Linger Longer: do any of us young single adults feel like sexually mature human beings? It’s certainly something to chew on, along with the cheesy casseroles, Costco rolls, and freshly baked cookies, amidst the flirting and fellowshipping taking place all around you. In fact, if you’re serious about getting the conversation going, I recommend screaming the question as loudly as you can. I, for one, will readily contribute my answer: It is, with all the confusion and frustration I can muster in my 26-year-old human body, a resounding, nope. Actually it’s more like this:

And this troubles me. I feel like, as an adult, I should understand myself and how my body works. I’m pretty afraid of my body, to be totally honest. Alright now that we’ve gotten things going, and you’ve gone over to put another handful of Doritos on your paper plate, let me illustrate my feelings with a seemingly unrelated story:

When I was a teenager, I first discovered what I would have labeled at the time “anti-Mormon websites.” Then as a freshman in college, I started to realize that the Church’s history and doctrine are riddled with legitimately concerning complications. And so I began to study the more difficult questions and historical blips in the traditional narrative for things. I felt God guiding me through my studies, and certainly approving of my desire to understand the whole picture instead of the simplified one I learned at church all my life.

But one topic was off-limits: temples.

I personally decided that, until I had the experience of going through the temple myself, I would not read about, think about, analyze, or study claims about the temple or its origins. Then, after I went through, I would be free to study everything I could find. I don’t believe everyone needs to take this approach to the temple, but I am glad I did. My first experience with the endowment ceremony was one of the highest points of my young spiritual life to that point (I feel very fortunate about that.)

After I went through, I almost immediately returned to my saved podcast episodes and online articles about the origins of the temple. And I found that study immensely enriching and helpful in my understanding of the temple. I was glad that I was now totally open and free to learn about the temple, but I was also glad that I had waited until I had that first experience for myself.

You surely can see the connection to our Linger Longer conversation: I have essentially applied this same principle to sex. I have been operating under the mindset that learning about sex (including my own sexual feelings) will enrich my life and make me a more whole individual, but that until I am married, I should bookmark and mark as save-for-later every sexual thought and feeling I have.

Weeelllll I really do not feel that way anymore. I still want to be chaste — I love chastity and believe in it as a principle, and not as a way of escaping sex. I do not believe that chastity and sexual maturity are mutually exclusive. But there are some seriously significant differences between waiting for the temple to learn about the temple and waiting for marriage to learn about sex.

First, the temple has nothing to do with my bodily functions, so one really can deal with that at a greater leisure than one can with sex. And second, my experience with the temple is entirely my thing. Waiting to understand sex until I get married entirely depends on another person. In one of the most enlightening BYU devotionals I have ever read, Elder Oaks spoke about timing. And he gave this amazingly under-appreciated advice to missionaries:

And at another point in the talk, more to the point:

The timing of marriage is perhaps the best example of an extremely important event in our lives that is almost impossible to plan. Like other important mortal events that depend on the agency of others or the will and timing of the Lord, marriage cannot be anticipated or planned with certainty. We can and should work for and pray for our righteous desires, but, despite this, many will remain single well beyond their desired time for marriage.

So with all this in my mind, I kind of don’t think that I should continue to think of sex as an off-limits subject until I get married. Although, I don’t really know how to become sexually mature without having sex. But I believe it it’s possible. So in that spirit let me offer this definition of sexual maturity and hereby claim that I find it desirable as a young single chaste virgin adult: A sexually mature adult neither suppresses nor gives into all sexual feelings, but makes choices based on an understanding of and commitment to oneself.

But that’s just me: I’d really love to know what you think, and what everybody at your Linger Longer thinks, too. And as for that guy in the shirt and tie telling you this is hardly the thing single people should be thinking about, feel free to throw this in his face: CS Lewis wrote all about sex in Mere Christianity and he wrote that before he was married. So we aren’t the first unmarried Christians wondering what in the world we are supposed to do with our bodies.