Analyzing feedback took a while, but the process was insightful as it was entertaining. First, let’s go over some of the demographics of respondents:

Ages: ranged from 16 to 72 years old. Average age of respondents was about 28 years old, with the median at 25 years old.

About half of respondents were from Utah (mostly Provo/SLC area), and almost half of the other respondents are scattered across the U.S. (mostly east coast and California.) There were a few international responses from Mexico, Australia, UK, Canada, and Belgium

We asked the general question “what are you doing with your life right now?” and most respondents are in school (with close to 25% having attended or graduated from BYU.) There were also a large number of working parents, stay-at-home parents, and people experiencing a mix of school/work/figuring out life. Most interesting response: “Being the first sister wife in a lesbian cult.”

We also asked “How did you find Young Mormon Feminists?” and most respondents found us through the “bloggernacle” – Feminist Mormon Housewives, Exponent, By Common Consent, podcasts, etc. People also discovered YMF through friends, word of mouth, and Facebook or Twitter. All other responses can be summed up with this one: “Googled the words ‘mormon feminism’ one day out of curiosity and I found my people.”

Questions on blog or group activity (summed up in graphs):

How often do you check or read articles on the blog? 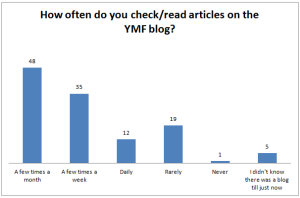 How often do you visit/participate on the Facebook page? 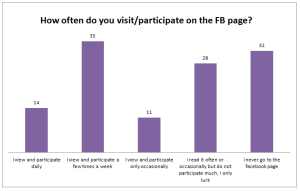 We also asked what respondents liked/disliked about the YMF blog. Here’s a list of what was emphasized or brought up the most:

Blog Dislikes: posts are too depressing and/or negative, format/design needs improvement, want more variety of content (e.g. videos, polls, comics), too pretentious or overly intellectual, too much focus on Mormon culture (want more thoughts on Mormon doctrine), little to no moderation on comments, not enough posts specifically on Mormon feminism

The same kind of question was asked in regards to the Facebook group:

FB Group Dislikes: too negative, lack of moderation, over-posting click-bait and other irrelevant stuff, contention that causes emotional/psychological distress (and no ideas on how to fix it), people seem too quick to attack others (e.g. people new to group or new to feminism are too scared to post), active LDS members or people going through faith transitions don’t feel safe or welcome, SWERF/TERF members that lurk, it’s a white people’s club, not enough content warnings on some posts (potentially triggering photos/comments)

Then respondents were asked,  “What can admins do to better organize/moderate/respond to issues with YMF?” Some responses:

– If a certain number of people agree that a person is being consistently problematic/saying problematic things, then that person needs to be removed from the FB group.

– Pause overly contentious threads in the FB group for a bit so that things can cool off. Delete posts from trolls and make sure certain posts have proper trigger warnings (FB group and blog)

– If TWs aren’t posted within 1-2 days, possibly hide the OP until it is done or edit it

– Make sure people use donotlinks for problematic sites

– For the blog – have the previews of the posts be more than just some of the beginning sentence. Also, a more accessible archive of past posts.

– Provide and allow a fuller spectrum of opinions, even if unpopular with group members

Now onto responses regarding church activity and beliefs…

How would you describe your activity and/or belief in the Mormon church right now? 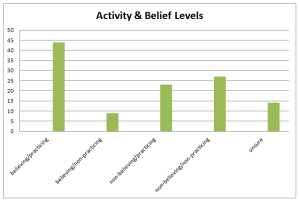 How supportive is your family of you in your current relationship with Mormonism? If you have doubts or things you’re working on, do they know and do you feel comfortable talking with them about it? 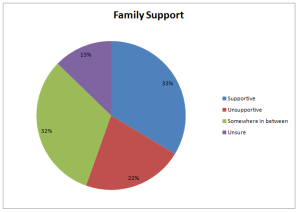 Are you more of a Korihor or a Captain Moroni? 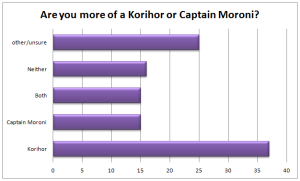 What’s the most Mormon thing about you?

– Being boring; Mormon guilt and shame, constant desire to be perfect

– Praying, all the time (e.g. when things get lost); attending church and accepting callings

– Interest in genealogy and journaling

And some fun ones…

When was the last time you saw an indecent shoulder and nervously started singing “Hum Your Favorite Hymn”?

– “My roommate’s bra strap was showing the other day and Lord have mercy that little strip of fabric got me all hot and bothered.”

– “I am immune to the paralyzing lust of indecency”

– “During my shower this morning. It’s hard to stay covered during those things.”

– “I’ve trained my eyes to never look at anyone below their neck. Since then my life has been overflowing with the Spirit.”

– “All shoulders are beautiful and holy. I would sing: For the Beauty of the Earth.”

– “People actually do this?”

A General Authority of your choice rolls up to your house in your most coveted mode of transportation. He texts you that he’s out front and you walk out the door and join him. The two of you are temporarily translated, and before you return to earth, you get to ask God/Goddess(es) ONE QUESTION, and that GA will have to report back to the other leaders and you’ll get to either keep it to yourself or tell the internet. WHAT DO YOU ASK?

Questions that were brought up the most:

Heavenly Mother (who, what, when, where, why, how; Can I talk to her?), How do LGBTQIA people fit into the Gospel, priesthood, and Plan of Salvation? (And are you okay with us fully expressing our identities and having relationships?), What are actual things women do in the celestial kingdom?, WHY MONTHLY PERIODS? WHY?, Why are women and minorities treated so poorly?, Honest answers about polygamy, please?

Assuming their bodies have been perfected and every hair on their head restored, which three famous Mormons (assuming all ancient scripture people are Mormon, and you can choose Mormon history or alive-today Mormons) would you choose to be on your team for an epic dance-off between you and Satan? Explain your answers.

Many, many memorable answers that were hard to choose from. Here are a few:

– The three Nephites, obviously. I have a theory that they haven’t been spending time helping stranded travelers change tires; rather, they’ve been studying centuries of dance across cultures. Think about it. What could be better against Satan’s mad dance skills than a group of (probably) dudes who have been studying dance for hundreds of years? They’ve seen it all! Lived all the fads!

– Aren’t Derek and Julianne Hough Mormon? Them and an Osmond. For obvious reasons.

– Carol Lynn Pearson (she is a classy lady, I love her stage play “Facing East” and her book made my cry), Elders Price and Cunningham! (JK not real), Emma Smith (I just think that with Ol’Jo’s wife juggling she hasn’t gone on a date for a while), Bro. Bringham’s cross-dressing son (we have much in common.) Dancing with the devil, see what you did there 😉

– Jesus (that’s all) – because of ever famous water walk move

And…just in case this post wasn’t long enough…here are the top 3 gifs that were submitted:

One Response to “ymf 2015 feedback responses”