Sunday Spotlight is a series where we profile individuals in the Young Mormon Feminists community to hear their stories and get to know them a little better through Q&A or their personal narratives. This week we talked with Brianna. 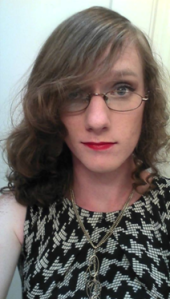 I’m an Oklahoman living in Utah.  I’m currently studying music education at Utah Valley University with a vocal emphasis. I also participate in the One Voice Choir, which is a choir in Salt Lake City aiming to build bridges between the LGBT and religious communities and their allies.  I’m also transgender and sometimes do panels and things to help increase understanding of what that means.

I was born into the Church, and I was more or less raised in the Church as well.  That’s actually a big part of why I’m in Utah, since I moved here in high school when my dad got accepted at BYU.

Growing up, my mom would tell me about the suffragettes and how brave and important they were. One time I was watching TV with her as a kid when someone mentioned the pay gap.  I had no idea what that was. She told me that it was the fact that women get paid less for doing the same work as men, with no other reason than the fact that they’re women, and how that wasn’t right.  I guess from that point forward I had a lot of feminist mentalities, but I only really identified as a feminist a couple of years ago when I learned that I could be a feminist without being a major politician.

I see that while the Church has done a lot of good, it also has a lot of room for improvement, including a lot of really intersectional areas, like women’s rights, the LGBT population and racial minorities.  I really hope to see the Church move further forward in those areas.

I plan on having my degree finished, finishing the PRAXIS for both music and math, and hopefully I’ll be somewhere super hipster like Portland or Seattle directing a high school choir and composing on the side.

This is a bit of a tricky thing to say really eloquently, so I’ll just be really upfront and honest about it: the new trend is to say that gender as a whole is a social construct, but remember that by saying that, you’re being really dismissive of the experiences of a lot of people who are transgender.  A lot of people don’t mean to be dismissive or mean when they say it, but it implies that being transgender is a choice. That little phrase is what inspired a guy in a feminist circle to straight up tell me that I’m transgender because of how I was raised, which isn’t a very fun thing to hear in what’s supposed to be a safe and supportive space.

Also, if you mix peanut butter (preferably the “natural” kind that you have to refrigerate) and Sriracha sauce into Ramen, it tastes a little bit like Thai peanut.  Try it!