A while ago, LDS Living magazine ran a survey to find out what qualities Mormon men value in their future/current spouses. They then asked Mormon women what qualities they valued in themselves and compared the results.

The graph is notable for the disparity on the right end between what Mormon women valued in themselves and what men valued in women. Some YMFers were naturally curious how young people who identify as Mormon and feminist would respond differently to a survey like this one. This article is a report on the results of that survey.

For the survey, I included most of the qualities listed in the LDS Living survey, with the exceptions of the highly ambiguous “a good parent” and “a great spouse” (“a great spouse,” really, isn’t what this whole survey is about) as well as “spiritual leader in the home” and “the final decision maker in big matters” because they imply hierarchical relationships and rigid gender roles that I just wasn’t going to bother with. I then added some qualities that YMFers in the past have said are important feminist values and a few qualities that seemed to be standbys on Dear Future Husband lists from Young Women’s (I always included some salacious variant of “good in bed” both because it was important to me and in order to scandalize my YW leaders.)

1. What is your gender? [Genderqueer, Woman, Man, Other, or Prefer not to say]

2. Which gender(s) are you attracted to? [People, All genders, Multiple genders, Women, Men, or Prefer not to say]

3. How important to you are each of these qualities in a future partner?

4. How important to you are each of these qualities in yourself?

For 3 and 4, the respondents rated each of these qualities on a scale from 1-10, with 1 being the least important and 10 being the most important:

-Has a sense of humor

-Makes a difference in the world

-Has a successful career

These are the results of the survey for all participants, regardless of gender or sexual orientation. 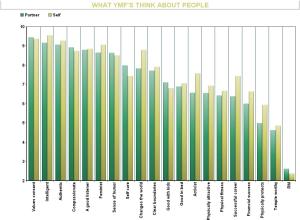 1. Overall, people tend to value qualities like making a difference in the world, having a successful career, being an activist, and physically protecting their family more in themselves than they do in their current or future partners.

2. Similar to the men in the LDS Living survey, men in our survey were lukewarm toward women having a successful career, physically protecting the family, and being financially successful–but people who are attracted to men were similarly lukewarm toward these qualities in men.

4. Hooray for consent, intelligence, authenticity, and compassion. You just can’t go wrong in the MoFem dating game if you develop these four qualities.

Were there any surprises for you in the results of this survey? What other interesting observations can you make from this data?

Gelaina is from Vancouver, Washington and American Fork, Utah. She is currently studying computer science at the University of Utah. She speaks three languages and likes surprises.