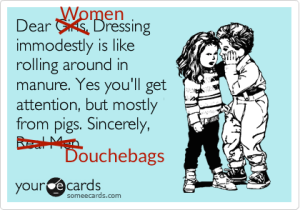 During the six years I spent in the Young Women’s program at church, modesty standards were drilled into my head with vigor. Little emphasis was placed on modesty in terms of attitude or wealthy appearance–  almost all instruction was focused on the importance of covering up the female body. Many of the things I was taught by my well-meaning leaders were based on falsehoods, such as the idea that self respect is tied to modesty or the false claim that men are carnal, wicked beasts who cannot control their sexual urges.

Modesty was again a frequent topic in my seminary classes, and despite sitting in a room filled with people of both sexes all discussion was pointed at women. All of my seminary instructors were men, and in retrospect I find the fact that adult males are encouraged to teach teenagers about how sexual and provocative their bodies are to be disturbing and highly inappropriate. Usually these teachers would try to make light of the lessons with jokes or comical stories, perhaps as an attempt to diffuse some of their own discomfort about teaching the subject. I remember one joked-filled lesson in particular where the teacher told the class about a routine his wife would do every morning where she would inspect various parts of her outfit for modesty. The only part of the routine I remember was the inspection for potential cleavage, or as the teacher said “bend over in the mirror, and make sure that you can’t see what my wife calls The Grand Canyon.”

The Grand Canyon? No. My body is not a national park. I fully acknowledge that this teacher had good intentions and was making a joke, but that doesn’t mean that his comment wasn’t laced with sexism. It has been years since I sat in his classroom, yet this lesson has stuck with me because it has shed light on one of the most problematic aspects of modesty rhetoric: the objectification of women that happens during the teaching process.

The way that we talk about modesty treats the bodies of woman as if we are objects of public property that are open for discussion. It treats women as if we are national parks where everyone is welcome and anyone can claim ownership. The treatment of women as public property is also seen in discussions of celebrity weight, casual touching of a pregnant woman’s stomach, and the societal acceptance of street harassment. This external ownership of bodies is grossly present in the teaching of modesty, and it needs to stop.

Women are taught that they do not have ownership of their own body through the expectation of adjusting clothing to suit the desires and needs of other people. When we teach girls and young women that they need to cover up to prevent men from leering, we are sending the message that the hypothetical thoughts of strangers are more important than her comfort or personal choices. It teaches girls that they come in second place to the desires of men, and that they should be constantly aware of how potentially sexual their bodies are (even in situations where they would not have considered it themselves).  Additionally, it sends the message that the female body is bad. I certainly do not believe that my body is bad or that it needs to be covered. The way my body exists is natural and it is nothing to be ashamed of, and it does not need to be hidden. When we promote modesty rhetoric on the basis of sexual temptation, we are unintentionally teaching that women have been cursed with a tempting, sexual body that needs to be covered up– and it needs to be covered up because the men who “own” the bodies of women may not like seeing an immodest woman.

As YMF blogger Grace wrote “The first step toward remedying the hurt caused by this kind of rhetoric is seeing women and girls as full human beings who exist outside the potential of their bodies to excite, and this won’t happen until I can wear a swimsuit that reveals my stomach without being told to cover it up.”  Not only must we recognize women beyond their physical appearance, but we must recognize that we have no right to speak openly about the appearance of any woman.

When we call out specific types of apparel as immodest we are passive-aggressively attacking the women who wear those articles. When we project the intentions of another woman (e.g. “she is just dressing for attention) we take away her autonomy to make complex decisions and we reduce her to an object that we feel we have authority over. This is not productive and it encourages woman-on-woman hatred and competition.

Lessons about modesty usually do a great job of teaching, however the lesson taught is not one that I can support or endorse. The take away message is filled with shame, body policing, and rape culture. All of these things do a great job of controlling women, and they are oppressive and damaging. If you are a parent, church leader, or seminary teacher I ask that you consider the message that you are actually sending when you teach or enforce modesty.