Sunday Spotlight is a series where we profile individuals in the Young Mormon Feminists community to hear their stories and get to know them a little better through Q&A or their personal narratives. This week we talked with Berta. 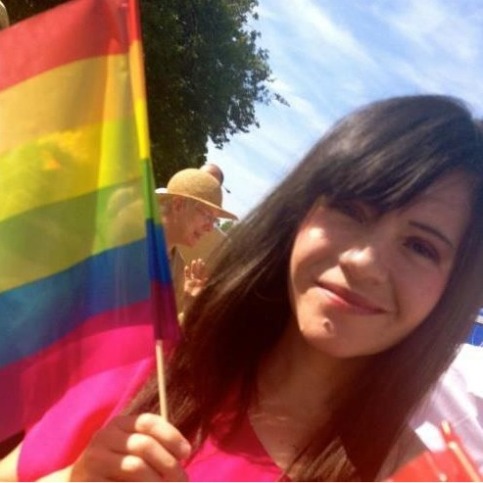 My name is Berta and my primary work revolves around advocacy on behalf of of the LGBT community and personal ministry to those from the LDS faith tradition who are LGBT and in crisis.

At present I am helping to co-produce a Mormon specific version of NALT, a break-off of the Trevor Project wherein Christians are able to bespeak their love and affirmation of their LGBT brothers and sisters. In this instance it is Mormons from all walks of life, families with LGBT loved ones, ecclesiastical leaders, and the general membership who are contributing their stories and messages of affirmation.

I am also marketing director for Safe and Sound, a program that places homeless LGBT youth in host homes. I co-founded this nonprofit because in Utah foster families are reluctant to take in LGBT young people and LGBT led households, which would step up to help, are not allowed to foster or adopt. This leaves no safety network for LGBT young people who have been kicked out of their homes or who have left because of antagonism and abuse. According to the Point Foundation’s last count, which was carried out this fall, there are approximately 5,000 homeless young people in Utah. Of these 40% self-identify as LGBT, which is an incredibly disproportionate number, and 60% come from Mormon homes. I am working to change this because so few know what is actually happening, because of how many youth are living in squats, and alleyways, and camps along the Wasatch front, and how blind the general population in Utah is to what is happening to these young people who often fall prey to sexual predators, the sex trade, and violence in every imaginable form, to say nothing of hunger and exposure to the elements. I doubt Mormon parents who kick out their gay children when they come out know what their child will be subjected and exposed to. simply because they feel that allowing the child to the remain in their home is a form of condoning of all things gay, which they have been taught to fear and in some instances disdain with great aggression. To me the most egregious sin against the family is not to have an LGBT child but to relegate that child to the terrors of homelessness.

I am presently working for a campaign that is laying the groundwork to pass a statewide nondiscrimination ordinance in Utah that will provide employment and housing protections for the LGBT community. Gender, religion, race, and age are already constitutionally protected from discrimination at the state and federal level, but no such protections exist for the LGBT community, which in this state is subject to high levels of workplace and housing discrimination. In Utah it is still legal to fire someone or evict someone simply for being gay or transgender, and this has happened to many of my personal friends as well as people I work with and minister to. Some of these are families with children. For me real family values include protections for all families, not just those that fit the hetero-normative template.

I am on the Steering Committee for Mormons Building bridges which works to elevate the discussion surrounding the LGBT community and issues at the level of our chapel practice and homes.

Lastly, and perhaps what I am most excited and passionate about, aside from helping LGBT young people, is the PAC (political action committee) I am helping to launch which will be specific to Mormons who desire to support marriage equality in a variety of ways. These will include dialogue and messenger training, and the provision of forces on the ground for organizations in the states where marriage equality is up for the popular vote or legislative initiative by providing canvassers, phone bankers, and anything else that is needed. We will also help members to learn how to dialogue with their ecclesiastical leaders and ward members in a way that will invite and engender change. while also protecting their membership and standing the church.

I am a Mormon because it is the faith tradition in which I was raised and which I have found much that is beautiful and good and worth building upon. However, Mormonism is very much a heterodox practice for me. This is to say that the portions of our theology which I retain and have integrated into my personal code of ethics and my relationship with the divine embraces much of the faith tradition that tutored my heart in my youth, but my personal cosmology at this point also transcends and is more inclusive than Mormonism presently allows for. However, I like that Mormonism is in my DNA and pulses through my veins. That is to say, although I am not an  orthodox practitioner, I do not desire to extricate my Mormonism from me because it is a foundational source of my identity that I feel carries beautiful intimations of the transcendental and divine in it.

I grew up seeing the great force and power for good that women can be, particularly in the form of my mother who is one of the most remarkable, strong, and compassionate people I know. The teachers that took me under their wing as a poor kid growing up in the barrio both in elementary and middle school were all women who were passionate about their work and helped to instill in me a great love of learning, reading, and the perpetual intellectual curiosity that still inhabits and defines my personhood to this day.

I also grew up seeing what can happen when women are marginalized or excluded. Whether in the form of machismo in the Latino dominated neighborhoods I once lived in with its attendant horrors, most markedly the high incidences of domestic violence, or the silent background role deeply gifted women were relegated to in both the Spanish and English speaking congregations I attended and families I knew–all of these things served to open my eyes from my formative years until now to how beautiful and good life can be when women are allowed to fill the measure their creation, and how sorrowful when they are relegated to shadows, subjugation, and secondary status.

There is nothing more natural to me than the reclamation of priesthood power and leadership as was originally given to women by the prophet Joseph Smith. Women used to bless and anoint each other before going into labor; bless, anoint and raise the sick; and Relief Society as originally envisioned and launched by the prophet was far more robust and independent than the incarnation we have today. There is also no doctrinal basis for the ways in which women have sometimes been systematically excluded–it is purely cultural. For example, it is not until 1978 that women were allowed to pray in Sacrament meetings for the first time, and it is not until last year that they were allowed to do so at General Conference. There is no legitimate basis for this kind of exclusion, but our present practice of patriarchy has systematically interwoven it into our chapel practice, and the way in which we are taught our homes ought to be governed. In a way, this is a form of decolonization for me. I am a refugee from Guatemala but I am also a refugee from the unkindnesses of patriarchy. It is in the work of reclamation and making Mormonism my own, that is to say, in teasing and drawing out our historical iterations of Heavenly Mother and the feminine divine, that I have found a source and place of empowerment rather than exclusion, that I have found not only refuge but a voice.

I will continue to work to improve a lot of the LGBT community particularly where it intersects with Mormonism from whence I feel a great many casualties are stemming. I don’t necessarily foresee this kind of work ending for me. However I am also deeply passionate about human trafficking and particularly sex trafficking as it relates to women and children. We are at the cusp of the civil rights movement as it relates to the LGBT community, and this is where I feel the greatest urgency to work right now, but eventually I hope to fight sex trafficking with every resource and capacity that I have. I hope to have published at least one book by then, to have married the person I love, and to be surrounded by children and living things. I hope to foster and to adopt, and I hope to establish a household where the friendless can find friendship, where the forgotten can be remembered, and where the marginalized can be empowered and inspired as I have been by others.

Thank you for the opportunity to engage with and to learn from you. You’re doing important work in seeking to elevate the lot of women to a place of empowerment and equality. Never be discouraged when you encounter resistance or outright antagonism. Whenever I feel that the odds are overwhelming I remember that I have a father who is alive because of a small gesture by a small but determined group of people. When my father was going to be extradited from Costa Rica back to Guatemala for execution because of his political activism on behalf of workers, a small group of people in Sweden decided to protest his extradition, and because of their small act and determination to stand up on behalf of my father he he is alive today and I have a dad. Never doubt your power to do great good. Yes sometimes the structural forces of opposition may seem intractable, but it is only a matter of time before we prevail. The trajectory of history is one that will elevate perpetually towards the crescendo of social justice, if you and I are willing to do the work required to bring it about. Just as you and I are the beneficiaries of the women who have come before us, just as you and I are able to obtain an education and vote and be protected in our workplaces from sexual harassment, and are able to own property, those who will come after us will be the beneficiaries of our work today. Imagine a world where where rape culture is largely nonexistent, imagine a world where sex trafficking has been relegated to a minority phenomenon on the run, imagine a world where child brides and gendercide and female genital mutilation are no more, imagine a world where men and women are allowed to share equally in power structures be it from our workplaces or places of worship. This is what we are working for. This is what Zion means to me–things not as they are but as they can become–and you and I get to be a part of helping to bring this about if we will engage in the work. You are capable and strong and I am honored to be counted among you.