Get up and grab a pen and paper! Some serious shiz is going down in the form of a letter writing campaign. It’s going to be crazy. 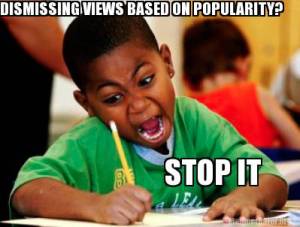 Crazy MoFem letter writing.  It will be fun!

Okay, maybe it’s not so serious and it probably won’t be that crazy, but I encourage you to join in! The letter writing campaign is called One of Millions (click here to check out the Facebook event page) and it’s coming up this Monday, November 4th. The campaign is directed at the Church’s PR department, specifically in response to the words Church spokesperson Ruth Todd spoke concerning Ordain Women. In case you need a refresher, she said, “Millions of women in this Church do not share the views of this small group who organized [Ordain Women’s] protest, and most Church members would see such efforts as divisive.”

So apparently it’s okay in our church to dismiss your fellow church members’ thoughts/feelings/efforts if they are the minority opinion. Wait, what’s that you say, dear reader? It ISN’T okay? Great! Let it be known! Join the campaign!

According to One of Millions, the purpose of the campaign is the following:

“Even if we aren’t personally asking for ordination, we do wish for things to change for women in the church. Implying millions of women in the church all agree with the official church response ignores the many, many women who leave the Church each year when their struggles go unheeded and their voices go unheard. It ignores the thousands or maybe millions of women who still attend Church but do so in quiet pain. We are searching for answers, and we are asking our leaders to hear our questions.

[…] This event is not to criticize or attack the LDS church, nor is it organized by or directly affiliated with Ordain Women. You don’t have to want female ordination to write a letter, nor do you have to be active in the Church or even be a woman. Anyone who has issues with the gender inequality in the Church and would like to see it addressed is welcome to write.”

I love that this campaign is an opportunity for you and me to have a voice. I don’t agree with Ruth Todd’s generalization of women in the church and I don’t want her words to be mistaken for my voice. Brigham Young said, “I am more afraid that this people have so much confidence in their leaders that they will not inquire for themselves of God whether they are led by Him. I am fearful they settle down in a state of blind self-security, trusting their eternal destiny in the hands of their leaders with a reckless confidence that in itself would thwart the purposes of God in their salvation, and weaken that influence they could give to their leaders, did they know for themselves, by the revelations of Jesus, that they are led in the right way. Let every man and woman know, by the whispering of the Spirit of God to themselves, whether their leaders are walking in the path the Lord dictates, or not. This has been my exhortation continually.” (Brigham Young, Journal of Discourses 9: 149, bold emphasis added).  If you are troubled by the way we as a church stereotype people according to gender, let your perspective be known! Our leaders cannot read minds. Let us not have a reckless confidence that might ‘thwart the purposes of God in [our] salvation and weaken the influence [we] could give.’ Let us not be afraid to voice our honest concerns about the church!

So do you have a pen and paper ready yet? Good. Get writing.

(If the reference of the title of my post was lost on you, listen to the following youtube video while writing your letter. I promise it will get you in the letter-writing spirit.)