[CW: domestic violence; sexual violence. Links go to sites containing statistics about domestic and sexual violence, and may contain pictures relating the and/or stories of victims and survivors.]

I am not sure what happens in other performances of The Vagina Monologues. At UVU, each performance ends with those who are survivors of domestic and/or sexual violence standing up, followed by those who know a victim or survivor standing up to join the survivors. My legs felt like Jell-o as I got out of my seat to stand among other survivors. I wept as I looked around the room and saw how many other people were survivors as well.

I know the statistic. Globally, 1 in 3 women will be raped, sexually assaulted, or beaten in her lifetime. But it is an entirely different experience to be in a room full of strangers, and see the number of survivors who have congregated to celebrate the possibilities of a world without violence. It is an entirely different experience to see how many people have been affected by domestic and sexual violence—people you pass in the hallways, people with whom you attend class, people with faces you’d recognize at the grocery store. People of varying genders, races, nationalities, abilities, sizes, religious affiliations, with varying degrees of outspokenness and commitment to activism. And almost every single person in the room knows someone who is a survivor.

The statistic shifts a bit, and suddenly hits very close to home.

Each shirt tells the story of someone’s survival, or of a life lost to violence. 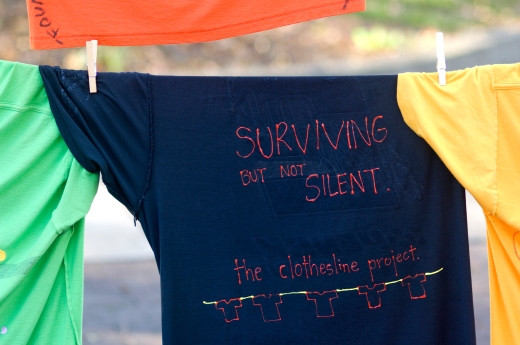 While walking through the rows of shirts, a gong is struck every 10 to 12 seconds, indicating that a woman has been battered somewhere in the U.S. Every minute, a whistle is blown to indicate a rape being reported. This does not account for the 54% of rapes that are not reported to the police. A bell rings 3 or 4 times a day, indicating that a woman has been killed her partner.

Walking through the exhibit is, indeed, a(n) horrifying, eye-opening, draining, soul-changing experience. I have not yet become brave enough to add my own story to the ones that hang from the clotheslines. But what a harrowing experience it is to see the sheer number of shirts on display—all stories of local people. Utah, like so many other places, has an insidious secret that it is trying to keep. Projects that give individual victims and survivors a platform to share their voices and stories, like The Clothesline Project, are engaged in the grueling work of exposing the secrecy.

But it is time to stop. It is time to unravel yourself from the false sense of security, and face what is happening in every community. It is time to engage in the work of overhauling the system, because a system that exalts one type of human over another, whether based on gender, race, sexual orientation, ability, size, religious affiliation, locale, criminal record, or a combination thereof, is a system that will always foster violence and inequality. It is time to stop upholding rape culture, and to stop being passive about other people upholding rape-supportive beliefs. It is time to not just educate, but to model what healthy relationships and consent look like. It is time to commit yourself to the cause because not committing to the cause of non-violence is, in itself, an act supporting violence.

Your community is not the exception. The patriarchy is pervasive. Rape culture is entrenched in the most seemingly-innocuous facets of our culture(s).

It is time to pull back the curtain, and expose what lies behind it.

International resources can be found via this website — http://www.hotpeachpages.net/