Transcript of a conversation between a me and a coworker.

Me: Great job on your award! You deserve it, you’ve worked so hard.

Her: Yeah, I’m happy to get it. I let my supervisors know, but there’s been no response back yet. It’s kind of strange.

Me: No one said anything back to you?

Her: Yeah. And I don’t know how to bring it up again.

Me: Everyone should know about this. How about I send an email about it to our PR person?

Her: (eyes lighting up) Would you? That would mean so much!

Me: ….(Pause)… Why do we feel we have to talk about ourselves through a third person? That’s strange.

Why DO women have a hard time talking about their accomplishments? We work hard and then downplay our achievements saying “oh, it’s not a big deal” or “I only got this award because of such a great team.”

My coworker and I had a similar conversation when I won an award earlier this year. The award was a big deal, I worked hard for years with other people telling me “you can’t do that” and I felt I really made a difference in people’s lives.  It was wonderful to be recognized. But it when it came time to let others know about it, I was the same as she. I didn’t speak up, I preferred for others to talk for me. I did mention my award a few times, but one of the consequences of that was to have a female manager complain that I was too “self promoting.”

This “female thing” alluded to in my conversation with my coworker can be subscribed to fear. Fear that others will think we are “full of ourselves” and fear that we might cause offense.

Another big fear is breaking gendered stereotypes and behavior. In Deborah Tannen’s groundbreaking book Talking from 9 to 5: Women and Men at Work it discusses how men and women speak of their work. Women use more hedge words and qualifiers such as: “I think, sort of, and maybe” which downplays their successes. Women speak to build teams and camaraderie, which is a great thing, but can also be an impediment to advancement. This style of speaking is called rapport-talk vs. report-talk in men.

When my friend won her award, she didn’t feel it proper to speak in “report-talk” and directly say what she did. She wanted to help me get the word out indirectly and she described her achievement with words such as “teamwork” and “committee.” She also said wryly to me “If we were guys, this wouldn’t even be an issue.”

These styles of speaking are ingrained in us since we were little girls, but still remain once we are adults. We want to be liked, but this desire to be part of a team hinders us not only at work, but at church. Although it would be nice to have our accomplishments and opinions validated and promoted through others, in reality we have to do it ourselves. 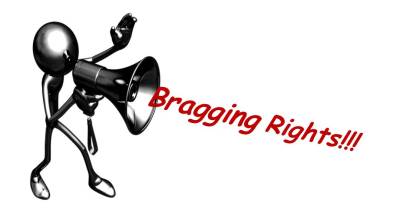 Have these scenarios ever happened to you?

It is very difficult to speak up about what we do and how we feel, it’s something I personally struggle with. Articles like these: “How to talk about accomplishments without bragging” and “Why Moms who brag need to stop”, plus the many women who get attacked on online forums such as Facebook, make that fear a reality for some.

Another harsh reality is that it is other women are the problem. Women, especially high-powered ones such as Hillary Clinton, are the recipients of the most vitriolic attacks. This negativity is hard to escape. The so-called “Mommy Wars” are not only on the playground, but at work and church.

A good place to start with this “female thing” problem, is to appreciate and validate what our sisters, neighbors, coworkers and friends are doing. And even if we feel jealous, how about we work on our own selves rather than attack others? We are all in this together and should feel free to give ourselves a pat on the back sometimes. We’ve earned it.

2 Responses to “the virtues of bragging”