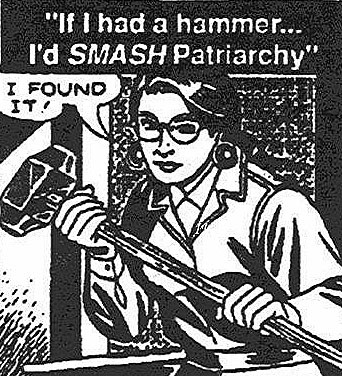 A patriarchal system is one in which adult men hold most, much, or all of the power. Patriarchy means “rule by fathers”, though the word as we use it now refers to men. Patriarchy is a system, not a group of people or a person. When feminists discuss dismantling, destroying, smashing, or crushing patriarchy this does not mean we wish to end all of the fathers in the world or all of the Stake Patriarchs in our acquaintance. Patriarchy is inanimate but pervades all sites of power: personal, political, economic, social, religious, sexual, and so forth. Patriarchy can manifest itself through different systems of oppression specific to community and culture. I, as a white, middle-class, Mormon woman growing up in the United States, experience primarily the Western Patriarchy, the Mormon patriarchy, and patriarchies specific to my race and class demographic. I experience the patriarchy of academia because I am a college student and the patriarchy of nuclear families. Someone different from me might experience a Jewish patriarchy, a patriarchy specific to South Asia, or a working-class patriarchy. Patriarchy is a system each of us is both complicit with and critical of at different times and in different ways.

Who does patriarchy affect and how?

Primarily, patriarchy gives men privilege at the expense of people of other sexes and genders. That said, it’s not completely black and white. There are side effects of patriarchy that are bad for men, such as the limiting experience of trying to live up to normative masculinity, and it could be argued that there are side effects of patriarchy that are good for women, such as the occasional free dinner for ladies who play their cards right and not being drafted in the US military. These are (arguably) good things but they are still part of a system which primarily privileges men and oppresses people who are not men. Therefore, most socially constructed gendered differences, even the few that seem to benefit women or harm men, probably originate in patriarchy, whether directly or indirectly.

In patriarchal cultures the patriarchy can manifest itself anywhere. It exists in the books we read and the music we listen to and in our ideas about sex, love and marriage and our individual interactions. Let me give you an example of a site of the patriarchy I witnessed this week, to illustrate: it was after dark and I was sitting at a bench on BYU’s campus having a long phone conversation with a friend. Two gentlemen sat across from me at a different bench with their dogs chatting with each other, just about within earshot. After my conversation ended, one of these men asked after my phone conversation and started making small talk. These men were strangers to me, and because I was raised as a girl, I was raised that talking to strange men in the dark, even as an adult, is dangerous. I was waiting for some friends to come meet me and I had no interest in talking to them. Like many people, but especially girls, I was also raised to prioritize other peoples’ feelings over my own feelings of comfort or safety. In addition, I didn’t want these men to become angry with me for being impolite, so I tried to be nice without engaging even though I didn’t feel comfortable talking to these men. I gave them short answers and didn’t make eye contact, hoping that they would get the message that I was uncomfortable. They didn’t, and we kept talking until my friends came and I could leave without feeling guilty.

This was a site of the patriarchy, particularly when you consider that the experiences these men were having were very different from my own. They didn’t seem to feel that talking to strangers in the dark is dangerous, but it was an activity that did not feel safe to me. My feelings didn’t seem like a priority to them, as they ignored what I thought were signs that I was uncomfortable and didn’t want to talk to them, whereas their feelings– particularly making sure they didn’t get angry at me if I explicitly said I didn’t want to talk to them– were primarily what I was worrying about. Obviously there may have been other factors at play. I may just be especially non-confrontational and skittish around strange men, or they may just happen to be friendly to a fault, but I use this example to illustrate that because we were all raised with a patriarchal paradigm, gender is often a factor even in interactions that don’t seem like they are necessarily gendered. Sites of patriarchy manifest themselves in ways that are more apparent. We can see patriarchy in the representation of women in the United States government, the kinds of roles and characters that are given to women in much of the media we consume, in rates of sexual violence and eating disorders, and in the wage gap. If you open your eyes to the way patriarchy affects our culture and sites of power, you will notice it coloring many interactions and experiences. We must be mindful of how patriarchy exists in our lives if we are to create a more just system to live in for ourselves and others.