Note: I am an endowed member of the LDS Church. In this blog, I’m going to discuss certain details of the temple rites without sharing anything that one covenants not to reveal. The opinions expressed in this particular blog post do not reflect the opinions of all writers of this blog.

the temple is sexist

I believe one reason why the LDS Church has so many troubles letting go of its heterocentric and sexist doctrines and policies is because they’re pushed so strongly in the current version of the temple rites.

I will show in this blog post how the temple rites are sexist, starting with baptisms and confirmations for the dead, going through the initiatories and endowments, and ending off with the sealing rites. I will not mention those things which in the temple one covenants not to reveal. All information about the temple found here can also be found at ldsendowment.org.

The temple has gone through many changes so far, so the request to change the parts that lead to misogyny, transphobia and homophobia in the lives of the Church’s members should not be that much to ask for.

baptisms and confirmations for the dead are sexist

The fact that an endowed male can baptize and confirm others in the temple while an endowed female cannot is the textbook definition of sexism. It’s as sexist as saying a qualified man can drive a car while a qualified woman cannot, and it teaches children that men can do things that woman can’t.

Everybody wearing matching jumpsuits, though, does teach that all people are equal, regardless of gender identity.

The message of equality found in the matching jumpsuits is so powerful that the misogyny of the initiatories, endowments, and sealings shock many women and men.

For many women in the LDS Church, the temple is the only time they’ll have another woman lay their hands on their head and pronounce on them a blessing. It can be an empowering experience, and it has even led some people to believe that women receive the priesthood in the temple, and that this priesthood authority is simply not recognized currently by the LDS Church.

That’s right. Man serves God. Woman serves man. That is sexist. It treats women as merely a support staff for men, and it plants the seeds of spousal abuse. 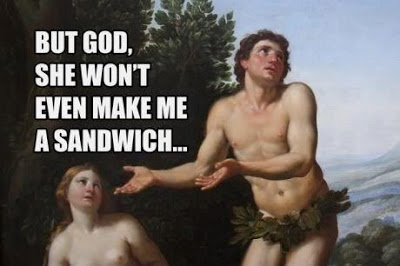 the endowment is sexist

It’s great that modern LDS Church leaders have decided that Eve is the hero of the Garden of Eden story.

It’s also great that some LDS Church leaders have taught that we have a Heavenly Mother who, with Heavenly Father, helped to create the universe.

It’s disappointing, however, that during the entire endowment rite, an all white male cast of Elohim, Jehovah, and Michael are the only ones creating the universe, with no mention of a Heavenly Mother or any other feminine presence during the creative process.

Misogyny anyone? How many women have been silenced because of this covenant? This particular part of the endowment reeks of unhealthy power dynamics.

Whatever seeds were planted in the intiatories are watered here as it becomes clear that man is found between Eve and the Lord, and Eve loses not just her individuality to her husband, but she is silenced as well.

The entire endowment rite itself has men and women divided on either side of the room, each wearing different ritualistic costumes. I already explained above how separating between women and men re-emphasizes a false and sexist dichotomy that forgets those outside that dichotomy.

The most problematic part of the female costume is the veil that is placed over her face when she prays. No such veil is placed over the faces of the men. Why is this? Any reason you can come up with is probably sexist and can lead towards damaging and unrealistic stereotypes.

The sexism of the endowment rite continues for many newly wed couples until the end of the rite when women are pulled through the veil by their husbands who represent the Lord.

The concept of being sealed to one’s loved ones for eternity is a beautiful concept. It’s unfortunate that such a concept is reserved for heterosexual couples and their children only. (Just like it was formerly reserved for only non-black couples).

It’s also unfortunate that in the sealing ordinance, a woman “gives” herself to be her husband while the man merely “receives” her. As in, he doesn’t give himself equally to her during the sealing rite. In the endowment, women as servants of their husbands, but now they’re being treated as possessions of their husbands.

After showing all the terribly sexist and heterocentric things in the temple, all that I ask is that these things be taken out or altered.

The temple has changed extensively since its inception with Joseph Smith. It actually used to be even MORE sexist than it is now. Women used to promise to follow the law of their husbands unconditionally. Eve used to be somewhat more ignored. And there was even a part where God curses Eve with sorrow during childbirth for partaking of the fruit.

Thank goodness we listened to women in the nineties and altered the temple rites to be a healthier experience for them.

Here’s a list of ways the temple rites have been changed throughout the years:

Many people have a wonderful experience in the temple despite the sexism, and it’s great that they do. You yourself may not find anything amiss or troublesome in the temple, but please understand that many people do, and it can cause much spiritual distress for them.

Let’s try to make the temple a beautiful and uplifting experience for everyone!

To read women’s experiences with the temple, please check out:

Feminist Mormon Housewives: How Feminism Can Raise the Dead

Dear fMh: I Don’t Want to go to the Temple Anymore

Mechanics of Mormon Subjugation of Females

Zelophehad’s Daughters: My Journey into Apostasy

89 Responses to “how the temple is sexist (and the church is, too)”