If Mormonism was a house, it would be huge. I like to imagine it as an enormous building on a pleasant, quiet suburban street, with flowerbeds and young trees growing out front, and perhaps a sprinkler sputtering around in circles. 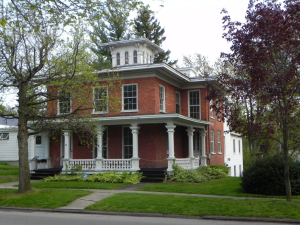 I imagine that everyone who identifies as Mormon lives in this Mormon house. Most of them were raised in the house, but many have walked through the front door, or climbed through an open window, and most of them love living there.

It is a creaky old house, and yet it also contains new additions. Some parts of it smell like the early 1800s (there is debate over whether this is a good or bad thing), while others have been either remodeled or newly added, and they add to the character of the house as a whole. Some people do not agree with the additions, while others clamor for more to be added.

Some people enter or are raised in the house and discover a beautiful back bedroom, with a mesmerizing stained glass window or spectacular artwork on the wall. The beauty and intrinsic knowledge conveyed in those pieces entrances them and entices them to sit and always stay in that one room. Other people wander around the house, chatting and finding beauty in all the people and rooms they encounter. Still others wander and find beauty, but also yearn for more. They are confused by some questions raised by the order and contents of the house, but don’t know where to go for answers. Some are content to stay despite or because of their questions- others are not.

The walls are lined with bookshelves where they are not covered with paintings and children’s drawings. Some rooms have high ceilings that inspire reflection and solitude, while other rooms have chalkboards for walls and are strewn with children’s toys, with knitted covers on the doorknobs to stop children from escaping into the hallway unattended.

Some people are very happy with the jobs they take on in this house- some love doing all the cooking, some all the cleaning, and others enjoy directing the traffic. Just like in a big family, others are not so pleased with the division of labor, but they believe in the community and are content to participate as directed for now. An industrious nature pervades the house.

The kitchen is constantly exploding with activity, churning out casseroles and pot roasts, jello and mashed potatoes, cakes and brownies, canned peas and assorted meals made from the wheat in the house’s basement food storage. A tv in a corner rotates between playing Feature Films for Families movies, Family Home Evening short films, and Saturday’s Warrior. 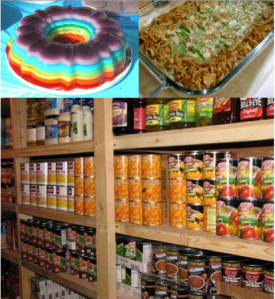 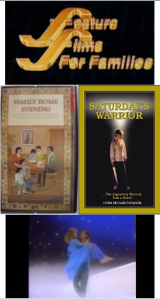 Some parts of the house seem to operate very differently than others. The leader of the house and his many counselors attempt to lead all the parts as best they can, but with such a big house and so many different jobs going on, they sometimes fall short. They, as well as all the inhabitants of the house, rely on a common faith in Heavenly Parents (though many inhabitants do not remember or recognize their Heavenly Mother).

When the people gather to worship and learn from one another, there is often rejoicing as well as misunderstandings. Some find it easy to laugh off and forgive harsh judgments and conflicts, while others become hurt and struggle to feel included. For every book or painting that one person can refer to in order to prove their point, another person can find another book or painting to prove the opposite. Such a rich and diverse history and culture in the house helps some people feel more at home, while others feel uneasy.

Some people stand in the living room, face pressed to the glass, as they gaze out the window at the world outside the Mormon house. They wonder, they seek, and they ache to know what answers exist to their questions. Some are tired of searching in all the cracks and crevices of the house for answers, and some have found such ugly and heart-wrenching things in the corners, attic, and basement that they struggle to remain in the Mormon house. Often their loved ones sit in comfortable armchairs right beside them, holding their hand, softly singing the stirring hymns and crooning for them to stay.

Not everyone is happy in the Mormon house. Many people hide their unhappiness by serving more, or by hiding themselves away in a corner, hoping no one will notice their pain. The many staircases and winding hallways in the house allow for people to explore and seek refuge, but they also provide little protection from the sometimes rude or dismissive yet often unintended attitudes of other inhabitants, as well as the history and unwelcome truths lingering in the shadows. 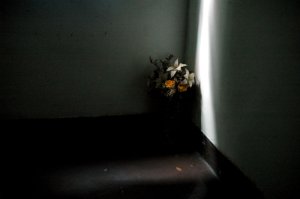 Other people who leave stand outside, face pressed to the glass of those same living room windows, yearning to be on the inside but unable to bring themselves to fully enter, oftentimes haunted or warned away by the dark shadows of history and underlying problems that exist in the house. Still others have set up residences elsewhere, but can’t stop themselves from sometimes strolling past the Mormon house to peer in the window and check on their dear ones inside.

There is certain lingo that most people in the house use: when they pray, they ask God to “nourish and strengthen” their bodies. They speak of eight-cow wives,  declare things “with every fiber of my being;” they speak of enduring to the end, strong pioneer stock, and they say things such as “tight like unto a dish.” When someone enters the house who uses different jargon, it is clear that they are different.

Some people who have left do not feel that they left on their own; they feel that others in the house pushed them or forced them out. They look at the Mormon house when they pass it with longing and anger and regret. There are some who stand in the doorway and at the windows calling out to them to return; some call out to remind the others of the beauties and truths contained in the house, while others call out “We need you! We need you!” For those who return, being back in the Mormon house is never the same.

Sometimes in the Mormon house, someone disagrees with the leader and his many counselors. Many in the house clamor for that person to leave and find another house rather than speak up about her or his disagreement. But oftentimes that person clings to the beauties and truths they have discovered in that house, not only on its walls and in its inhabitants, but in its very foundation, and they struggle to know what to do.

There is room for everyone in the Mormon house- the nature of the building, its people, and its make-up encourage all who enter to stay and find a place. But there are also many reasons to leave.

In some parts of the house, most people focus their discussions on modesty, tithing, and keeping the Sabbath day holy. In other parts of the house, most people spend their time teaching each other about and reflecting on the doctrine of Christ and conversion. Still other parts spend all available time serving those in their midst who need help, and do not spend very much time talking.

But despite the internal politics and ongoing changing and morphing of culture within the house, it remains fundamentally the same.  The inhabitants still look up to and worship God. There are always hymns trickling throughout the house, always people singing as they work. There are always small children running from place to place, giggling and smiling and being tossed in the air by their loved ones. There is almost always an awareness of needs, as well as compassion and love extended to those who are suffering. There is always reverence for loving Heavenly Parents.

And the door is always open.

15 Responses to “if mormonism was a house”