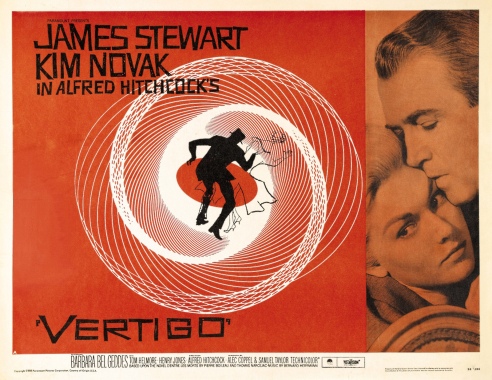 In Vertigo, a film regarded by the British Film Institute as the Greatest Film of All Time, director Alfred Hitchcock lays out a love story in which the lovers are frustratingly never on the same page, and sometimes apparently not even in the same century together. The film’s storytelling backbone is my personal choice for the greatest film score of all time (a score which, to my chagrin, was ripped off in the overrated recent Oscar winner The Artist, which owes most of the dramatic impact of its climax to the several-minute-long excerpt of Bernard Hermman’s brilliant work).

Vertigo‘s influence on later films extends further than its music, however — most notably, it pioneered the camera trick of zooming in while moving backward, creating a dizzying effect that can be seen being employed in this charming cat video:

Vertigo also poses a number of interesting gender problems to consider. (Plot spoilers follow, so if you haven’t seen the film, you really need to go out and do it right now.)

One central theme in the film is a woman who is willing to do anything, including change her whole self, for the love of a man. Kim Novak plays Madeleine, a woman we think throughout most of the film to be married to an old college friend of Scottie (played by Jimmy Stewart). They fall passionately in love with each other. After Scottie sees what he believes to be Madeleine falling to her death, he becomes obsessed with her and starts seeing her everywhere. Eventually he sees in the street  a woman, Judy, bearing Madeleine’s resemblance (and also played by Novak, but, to her great acting credit, with an entirely different persona). He follows her back up to her apartment and after terrifying her, demands that she go to dinner with him. She reluctantly agrees, and they begin a relationship as Scottie spirals more and more downward in his obsession with creating Judy in the image of Madeleine, buying clothes and making her change her hair. Judy, all this time, is miserable about Scottie’s obsession but goes along with it to secure his love for her.

On the DVD commentary, Kim Novak says the following about her character:

“From my point of view, when I first read those lines where she says, ‘I want you to love me for me,’ I just identified with it so much. Because going to Hollywood as a young girl and all, suddenly finding that they want to make you over totally, it’s such a total change, and I was always fighting to show some of myself, feeling that I wanted to be there as well. Like they’d do my hair and makeup and I’d go back in the back room and redo a bunch of things. So I really identified with someone that was being made over with the resentment, with wanting to [be made over], because needing approval and wanting to be loved, and willing, eventually, to go to any lengths to get that. You know by changing her hair and all of these different things. … I really identified with the movie because it was saying, ‘see who I am. You know? Fall in love with me.'”

The last act of Vertigo depends on the believabiltiy of a woman letting a male stranger into her apartment and offering lots of personal information about herself. Of course, the truth is that Judy is Madeleine, or Madeleine is Judy, and when you know what really happened (that the woman who Scottie saw fall to her death was the college’s friend’s actual wife, and Kim Novak’s character was simply a pawn in that scheme), it becomes entirely believable that she would know Scottie is not a stranger. But perhaps today, Vertigo would be entirely thrown off by that scene in Judy’s apartment — audiences today would not accept that she would let him in without knowing the backstory first.

As I watched the film most recently, I found myself wrestling with whether or not Madeleine/Judy is a sympathetic character. No matter how much I told myself that she is an accomplice to murder, and that she has been lying the whole time, I could not even for a second think of her in a negative light. Would it be different if the genders were swapped? Would it be different if she were less beautiful? Does Hitchcock’s obsessive camera make Novak impossible to see in a negative light simply?

Alfred Hitchcock was famous for obsessing over his leading actresses. In Vertigo, the director finds a way of exploring male-to-female obsession, as if working out one of his own demons. If the film’s conclusions match his own, the master of suspense found no peace in these obsessions, nor a happy ending. Audiences today can take away, in addition to the superb acting, beautiful score, and complex themes, gender questions that reveal societal demons, and debate how things, if at all, have changed.