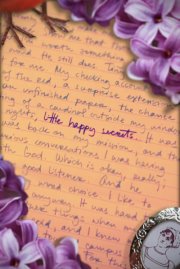 I cannot stress this enough: Provo-dwellers, BYU-goers, TBMs, prog-Mos, post-Mos, never-Mos, GO SEE LITTLE HAPPY SECRETS. This play, written by BYU alumnus Melissa Leilani Larson, was 60 abreactive minutes of Mormon mass media redemption. It’s the kind of play that makes half of the small audience cry for all the right reasons, without even a hint of saccharin. And, again, if it weren’t for the categorically besmirching clout of Beauty and the Beast: A Latter-Day Tale or The Home Teachers, I’d say that this play alone could redeem Mormon play/screenwriting as a genre.

The narrative unfolds primarily through the protagonist’s monologues. Claire is BYU student, returned missionary, English major, a Jane Austen aficionado. Throughout the play, she tells us about her tentative coming-to-terms with her sexuality as she recounts her close friendship with, and eventual love for, her roommate Brennan, her jealousy towards Brennan’s boyfriend, her frustration with God, and the complicated sorting-out of these feels that can only BYU can house.

There were, naturally, the inside jokes about BYU culture that were as welcome as they were expected: the pompous, pre-law archetype; the cultural cachet of The Princess Bride and Pride and Prejudice; the overabundance of Republicans; the tragic scarcity of caffeine. But the play also hints at obsessive fasting, the result of Claire’s desperate attempt to in effect “pray the gay away,” and Claire alludes to suicidal thoughts. These darker aspects of our religiosity, though, were nestled in a script of faith in God and spontaneous prayer, which I thought took into account the good with the horrible as fairly as possible. (Read: Claire’s character manages to be religious without making me want to puke, which is more than I can say for any Mormon media ever [not that I don’t find renditions of “Zero Population” compelling].) Although never apologetic, it was surprisingly not-angry. Which I found surprisingly refreshing.

I heard one person criticizing the play for its depiction of Claire’s coming-to-terms and coming out as too understated, too naive. I don’t think this is a convincing criticism – we all love that blog about the gender creative 6-year-old, and that Born This Way blog with all its adorableness, but the truth is, a lot of us are late bloomers. And I think this is especially true in a culture as sexually repressive as Mormonism. Coming to terms with my own fluid orientation luckily happened after I’d decided that Mormonism was fundamentally not working out for me and after I’d read Adrienne Rich, but that “after” came with years of denial.

The Echo Theatre is tiny, which lends itself to the immediacy of the play. The piano accompaniment to the script, keyed into the action, gives the play a radio drama aesthetic that emphasizes the storytelling aspect of the play. And this is Mormon storytelling at its most crucial. I’ll keep this particular soapbox brief, but when LDS leaders can file a brief before the Supreme Court once again trumpeting their support for Prop 8, it’s important for us to show that they don’t speak for us; to talk back; to, paraphrasing Elizabeth Cady Stanton, speak the truth that is in us. Offering alternative narratives is a powerful way to do just that.

Little Happy Secrets plays from February 7th till February 23 at The Echo Theatre (145 University Ave, Provo, UT). You can (and should) buy tickets here: http://www.theechotheatre.com/.