Guest post by Curtis Penfold, member of All Enlisted, on the inside of Pantsgate 2012 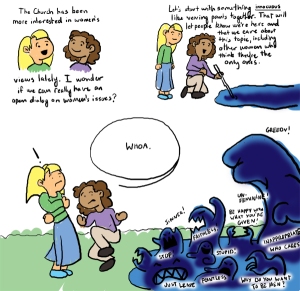 As a Mormon feminist, sometimes you talk and talk about how you’d like the Church and its culture to change, but you just don’t know how to change it.

In your personal life, you treat people in an egalitarian way. You try to see individuals instead of just gender. You try to pass your new way of seeing the world to those around you. When you hear sexism, you call it out. You try to explain to women and men that they can do what they like to do, and that they don’t have to be defined by old fashioned and unhealthy gender roles.

For me, I want to change the world. I want the Mormon Church to become the egalitarian Zion I think it can become–not just in my local ward, but worldwide.

So when I heard about “All Enlisted”, a brand new Mormon feminism activist group that started last Thursday, I got excited.

Joining the group, I loved the enthusiasm and creativity it contained. We threw out ideas of demonstrations we could perform until we decided on starting it all off with “Wear Pants to Church Day.” We thought it’d be good to start small, and that it’d be sure to get some attention.

Some in the group had contact with media personnel. I wrote a press release that we then sent to various media agencies. We made the event, and I helped to post it in as many Mormon groups as I could.

The first to report on us was KSL. They briefly mentioned that some Mormon women wanted to be able to wear pants to church. From there, we were in the Salt Lake Tribune, Jezebel, Fox News, and ABC.

As our event grew in fame, the haters started coming. They’d attack us in every possible way, telling us we should leave the Church for even suggesting that women and men were unequal.

Yesterday, as the attacks kept coming, we were shocked when we heard that Stephanie Lauritzen, All Enlisted’s creator, received a private death threat. I was very sad as I learned of all the hate mail we received. When it was leaked that Stephanie received a death threat, I thought people would show sympathy, and some did. But others said she deserved it. And that just got me really mad. How is it, in this beautiful Church we participate in, that people are going to justify sending death threats just because we disagree with somebody? Can’t we disagree with love? When I wear my purple tie this Sunday, I’m going to be thinking of Stephanie Lauritzen and my many other oppressed sisters out there who are afraid to be themselves and speak for themselves in what should be the Kingdom of God.

I woke up this morning still upset. Later that afternoon, I found that our event page was taken off Facebook. Looks like too many people reported it. (And yet, things like 12 year old sluts are still on Facebook?) We had 2200 people planning to attend before the page went down. We now have a fan page, though, for all those who’d like to support, and a  Twitter for anybody who’d like to follow.

Look out for us in the future as we continue to try to draw attention to the gender problems we’re facing in the Mormon community, and as we try to find a way to fix them.

For the official Church statement (pulled from the first Salt Lake Tribune article)- “Attending church is about worship and learning to be followers of Jesus Christ,” LDS spokesman Scott Trotter said Tuesday in a statement. “Generally church members are encouraged to wear their best clothing as a sign of respect for the Savior, but we don’t counsel people beyond that.”

For a taste of some of the negative response the event received on its Facebook page before being shut down, see these comments written on the event wall:

For a taste of some positive comments from the Facebook event: 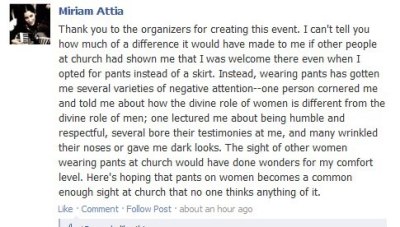 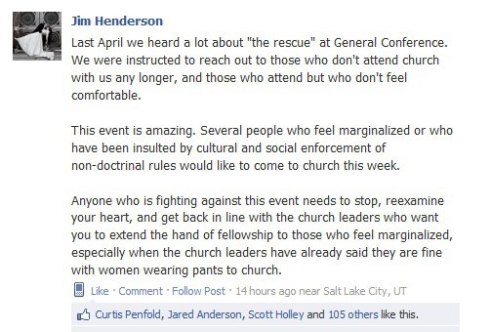 For other reports on Pantpocolypse 0’12, see: