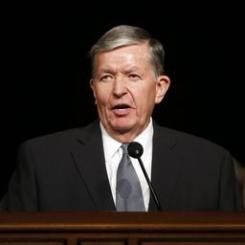 “The Space Wanderer was finding his adventures so satisfying and stimulating, so splendidly staged, that he was shy about asking questions—was afraid that asking questions might make him seem ungrateful.”   ~ Kurt Vonnegut, The Sirens of Titan

When I was a sophomore at BYU, I took Intro to Women’s Studies, my first jaunt into feminist academia. At that time, I hadn’t yet formed my now-passionate opinions on the social construction of gender and the marginalization of women throughout the world. Many of my negative feelings at church, school, and in relationships were characterized by this nagging sense that something was wrong, but I couldn’t put my finger on the problem.

It was in this ideological innocence that I first began seeking answers to honest questions. This was also the time that I learned an unfortunate truth about Mormon culture: we don’t take kindly to questions.

I remember driving with my friends somewhere (probably the creamery, God love it) and presenting one such question to the car: “What if BYU had a woman president? All women and men have equal access to the blessings of the priesthood, don’t they? So what difference does it make?”

After a few seconds of uncomfortable silence, the bravest among them rapidly explained the error in my thinking:

“Well the president is picked by the general authorities and they answer to the prophet and the prophet directly communicates with God so it’s what God wants so we can’t change it.”

And I thought, whoa.

I just went from asking a question to offending God in twelve seconds. That has to be some kind of record.

Truthfully, I will probably never have such an innocent moment of inquiring again, at least not when it comes to feminist issues. Today I would happily ask the same question and debate it spiritedly with anyone interested, but it would be with much more bias. But I can honestly say that in this early BYU moment I had no ulterior motives, no persuasive traps set for my conservative friends. All I did was ask a question. And they took me down faster than a streaker at a pep rally.

Why are we so threatened by asking questions, especially questions about the organizational and policy aspects of the church? Do people really believe that evaluating and critiquing these things will be damaging or even ultimately destructive to the church as a whole?

People often tell me that questioning our leaders demonstrates a lack of faith on my part, and that if I really, truly trusted them and believed in their authority, my anxieties and concerns would be no more. But it is my firm belief that asking questions and seeking improvement within my religion displays and even strengthens my faith. God has tasked mortals with building his kingdom, mortals who are weak and flawed. But all of us, our leaders especially, are strong enough to overcome individual weaknesses for the collective good. It takes faith to be open to new things, because new things are scary. And all those people who believe the church will be irreparably damaged by a little healthy dialogue? They are the ones who lack faith.

A wise friend of mine recently said this about coming to accept his non-heterosexual identity:

“Finding out the answer wasn’t nearly as terrifying as daring to ask the question.”

As a faith group and as individuals, we have so much room for growth. I know solutions will come, effective improvements will take shape, and many anxious and lonely hearts will find comfort and acceptance in a faith community that once neglected them. But these developments are conditional upon our bravery to raise our hands, clear our throats, and start asking questions.